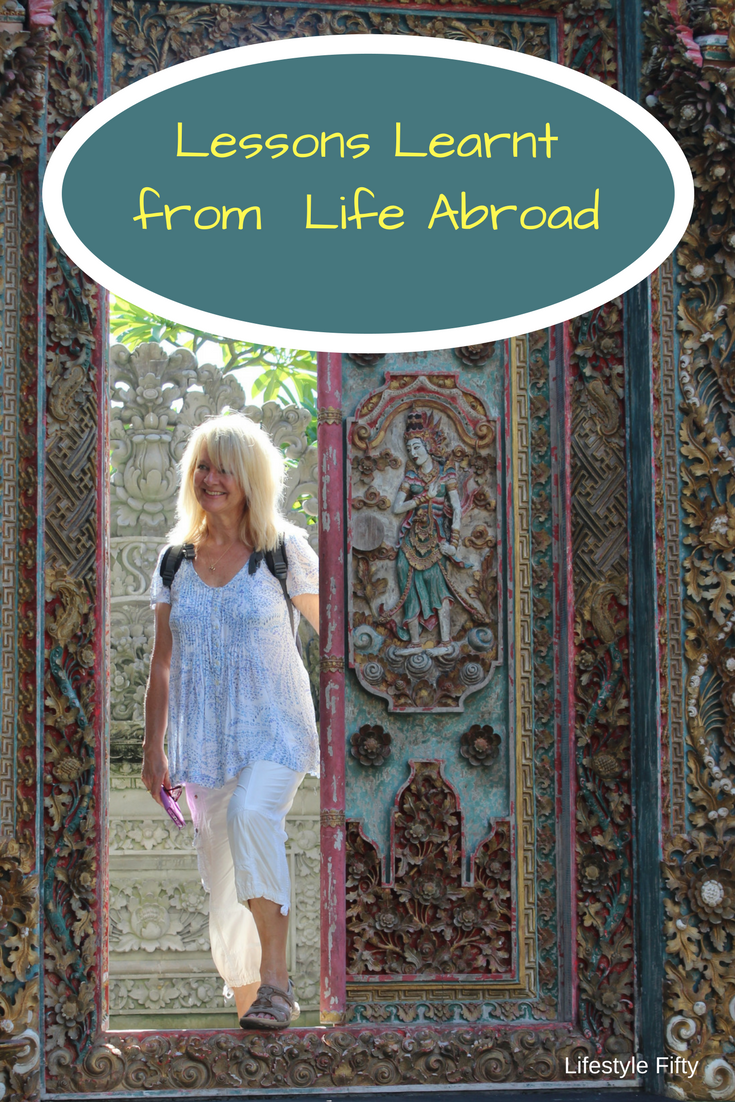 I’m not sure how you completely prevent being seen as an expatriate in an adopted country. Lessons learnt from life abroad include learning chameleon-like traits to fit in with the status quo of the new country, but whether or not that changes the question of your roots and where you’ve come from, I don’t know.

When I was oh so much younger than today and married my husband, then a practicing geologist, I thought life would be lived simply, in the mountains, possibly somewhere quite exotic, and I would be decked out with lots of sparkly little trinkets which he dug up to hang decoratively from my ears and around my neck.

Lessons learnt from life in my twenties

1. A geologist doesn’t get to keep any sparkly bits he digs up – if he finds any at all.

2. Parking the caravan we would be living in, close to a riverbank in Lesotho (Africa) because it was pretty, was not such a good idea because the river comes down in flood at least once each year. We learnt by our mistake 😉

Countless lessons learnt from life living abroad have taught me many things, one of which is that a diamond is not necessarily a girl’s best friend. That in fact was just a marketing campaign. Who knew?

But now, 11 countries later, two grown up children thankfully living in the same country, and a lot of frown and laughter lines attached to my face, we have landed up on Australia’s gorgeous Western shores with a houseful of furniture, but a distinct lack of twinkling treasures.

Would I have changed our peripatetic course?

No not a bit, not from the very moment when Dave arrived in England to ask for my hand in marriage bringing with him a good bottle of South African KWV brandy and news that he had in Out of Africa, Karen Blixen tradition, just “bought a farm in Africa.”

What he didn’t tell my father at the time was that although a snake ridden shack with three bedrooms had been procured, and it was conveniently situated slap bang on a possible future gold mine, there was as yet no sign of any possible drinking water, no matter how far he might drill into the golden earth.

“A farm in Africa, quite a catch”, I could see my Father thinking as he gladly gave me away to this handsome young man of substance with a farm situated a couple of hours west of Windhoek in Namibia.

“Look after her,” he said before adding “Don’t let her boss you around.”

And I realised I’d been traded, in fine African tradition – not for a herd of cows, but for a bottle of brandy.

No time for bossiness

There wasn’t much time for any bossing, or wifely nagging come to that. Every time I felt like an argument or a bit of haranguing, we moved … not just down the road, but across continents

During married life we’ve lived variously in South Africa (three times), Namibia, Lesotho (twice), Nepal, England (twice), Hong Kong, The Philippines, Taiwan and now Australia, Bunbury in the southwest to be exact. And I like it here. I’d like to stay a long while, please.

I think people have come to view us as crooks on the run, or international gypsies at least.

I’ve become a chameleon I suppose, able to adapt and fit in, because I have to in order to make friends. A trailing spouse par excellence, jack of all trades when it comes to moving (just give me a packing box and you’ll see what I mean), but master of little else.

Still, Madonna eat your heart out. I’ve got to reinvent myself frequently, but without the bru-ha-ha of international stardom. That’s the nice thing about relocating, you can wipe the slate clean, learn from the mistakes you’ve made and move on to new adventures and opportunities without the baggage that might go with living in the same place along with a collective memory that goes back three generations.

Living in villages, aah so cosy and such enforced expectations … but we’ve dispensed with all that. Perhaps we’re a new breed of pioneer, spawned by the 21st Century and globalisation.

Like when I set off from my Mum’s house in Devon, England, with a five week old baby. I look back in horror. I’ve often joked that I thought my baby was like a cocker spaniel puppy (I knew how to look after puppies but didn’t have a clue about babies).

Less pioneer, more without much sense, but so in love not to notice.

I strapped him to my back in an orange pampoose and set off to join my hubby who was working as a geologist on rehabilitating the Pokhara to Kathmandu Highway, in The Himalayas – a project funded by the World Bank.

No Doctors within three hours, no telephone within 40 minutes, dodgy water that had to be filtered three times with various primitive apparatus, and meat which appeared once a week in a hessian sack on the back of a travelling salesman.

We must have been mad, but we lived.

Life in Nepal with a baby

My baby boy grew strong and healthy on nothing but breast milk (wearing me out from lack of sleep). My breast milk was fortified not by a balanced Australian diet but by the occasional bottle of Guinness and lots of Nepalese vegetables and Dhal.

Later on he thrived on Heinz Lancashire Hot Pot baby food in a bottle, which was the only thing he seemed to trust as good to eat – and these little jars completely filled my suitcase, and friends’ suitcases on trips coming back from England.

I tried pureeing many things, but of course ‘chicken peri peri’ was not his idea of a square meal, nor was ‘aloo dum’ (a vegetable curry) or ‘takari dhal baat’ (spicy vegetables and lentils) which were about the only things I could cook with the limited provisions. These days though, as an adult, he does have a propensity for Asian vegetables and chilli, but he still has an aversion to peas and broccoli.

He was loved and cosseted. I had nothing else to do so far away from everything and everyone I knew. We went on long walks in the foothills of the Himalayas, he in his orange pampoose, me in my pink velour trackies, and we chatted baby talk for hours on end. I did countless hours of callanetics on the sitting room floor while he crawled all over me.

I coped with countless tummy bugs and learnt to understand how to contain boobs that spurted milk. I didn’t even wince when once a visiting colleague’s child said as I was breastfeeding, “Gee but you’ve got great big ugly bosoms.”

At night I cried, for I missed family, friends and support with the baby.

When Dave fell ill with so many tropical ‘itis’s’ his immune system almost gave up, we were repatriated briefly to England.

But that was just the start of our life abroad.

I like to think that I’ve learnt some life lessons along the way. Of course I forget them regularly. But this much I know is true.

“What would life be if we had no courage to attempt anything?” Vincent Van Gogh

“When I hear somebody sigh, “Life is hard,” I am always tempted to ask, “Compared to what?” Sydney J. Harris

“I have found that if you love life, life will love you back.” Arthur Rubinstein

“Life can only be understood backwards; but it must be lived forwards.” Soren Kierkegaard

Some of you know that I’m writing a Memoir, but I’m having difficulty with structure and ‘voice’. If you like this post or if you don’t like it, I’d love to hear your real comments and opinions. I’d also love to know whether you’d like me to make Memoir a regular slot on Lifestyle Fifty as I finish sections. Please Tell.

Improve Self Confidence as you Age
Next Post: Senior Travel Advice from a Savvy ex Flight Attendant