Ahoy there me Hearties!

Now I know that some of you like palm fringed beaches, and that others of you enjoy walking. I know that you like the idea of getting away from it all and I’m aware that you enjoy good food.  I also know that a lot of you go … “Ahhh,” when it comes to cuddlesome-fluffysome animals like Koalas and Wombats.

So it’s time to sail away together through cyberspace to a dream island which I hope one day you might get the chance to visit too.

Well, after the excitement of the Problogger Conference on the Gold Coast with over 500 bloggers attending – including the jolly lot below – I thought that the  levels of fabulousness in Queensland couldn’t get any higher.

But how wrong I was. The adventure in Northern Queensland was just beginning. And it started like this … by a beach of course!

Well, almost. Because there was a bit of travelling before that: A road transfer from the Mantra Sun City hotel where we stayed in Surfers Paradise to Brisbane airport, then a quick flight from Brisbane to Townsville, followed by a relaxing lunch on the beachfront looking across a suntanned piece of Queensland’s coastline from Longboards Bar and Grill.

Here the five adventurers were introduced; namely Michael from Townsville Enterprise, Hannah from Tourism and Events Queensland, and fellow bloggers, Nicole from Bitten By the Travel Bug, Sam from Travelling King and me.

From there we sailed on SeaLink Queensland to Magnetic Island for two nights.

I didn’t know what to expect at Maggie, as it’s fondly known by locals, because I had visited once for half a day about 30 years ago and I thought it might have changed ‘big time’. To tell you the truth, as an outsider, I don’t think much has been spoilt at all since then. No sky rise buildings or busy roads. Just a dreamy island waiting to be discovered with lots of bays and forest and koalas.

It took about 20 minutes to get to the island across a stretch of sea which was millpond calm. Magnetic Island is a suburb of Townsville and actually many people live on the island and commute by ferry to the city for work.

But why would you visit Magnetic Island out of all the other islands to choose from off the Queensland Coast? Here are a few reasons that come to mind.

The ferry terminal is set in a picturesque surround of bays, boats and forested hills. Here’s where your dream holiday begins.

For us, time was short and precious, and shortly after landing and unpacking we were whisked off to Bungalow Bay Koala Village  where we learnt about Australian wildlife in close proximity I might add.

We were allowed to hold, cuddle, and oggle all kinds of creatures. Of course the koalas pretty much stole the show although Harry the Wombat came a close second. Don’t worry, they belong to an animal trade union and can only be cuddled for a few hours a week. What I didn’t know is that Magnetic Island is home to the largest koala colony in Northern Australia, and the best place to spot them in the wild is on the Forts Walk.

However, at the koala village there were more than just koalas on show and I was (ahem) encouraged to hold a snake. I’m convinced it was trying to get up and under my shirt, and I wanted to scream. But I laughed, a little hysterically, instead.

Thinking about it now just makes me want to return. We joined the General Manager, Stefan Kracke, for a truly resplendent dinner at Boardwalk Restaurant on the starlit deck overlooking the yacht marina, and I tried Swordfish for the very first time. Have you ever had swordfish, I wonder? It’s really tasty, and Peppers presented it beautifully. Sorry, but I was too busy yakking and enjoying a glass of chilled Sav Blanc to take a photo 🙁

What I loved most about the resort

There was much more, but you’ll have to find out for yourself or read Sam’s review which I linked to above.

During our stay on the island we visited the most amazing beaches and bays, and enjoyed exploring Magnetic Island’s unique landscape; a combination of granite boulders, tall Hoop pines, eucalypt forest and small areas of rainforest. There are rocky headlands and secluded beaches, some only reached by boat. You really get the feeling of being away from it all.

And we travelled around the island in an open top Barbie car – yes really! Courtesy of Tropical Topless Car Rentals

Magnetic Island is made up of two-thirds National Park with around 25 kilometres of walking trails linking the island’s 23 beaches and bays. I loved the colours, not only of the landscape and flora but also the colours echoed in quirky cafes along Horseshoe Bay. I could picture a family holiday here … Christmas anyone?

Most of all though I loved the island for the seascapes. We were lucky to be there during the annual Sealink Magnetic Island Race Week which is held over 6 days. There were more than 70 vessels from across the country taking place in the regatta  – which had a relaxed party atmosphere – and we were lucky to be involved.

On our final night we enjoyed a fabulous dinner at Barefoot Art, Food and Wine on Horseshoe Bay. It was situated looking over the bay and has a cute fairy-lit courtyard at the back. 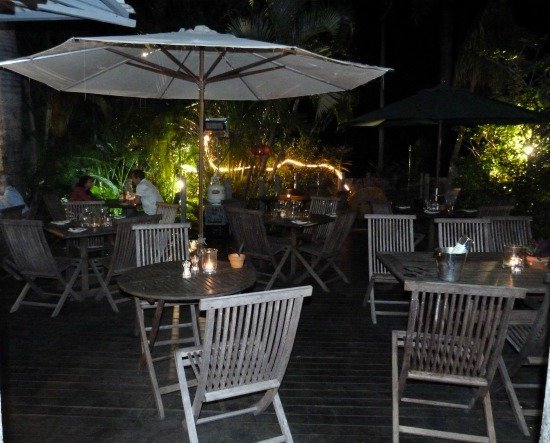 Oh and a big foot at the front – can’t miss it! Just Magic!

On our final morning we set off pre-coffee for the Forts Walk which starts near the Radical Bay turnoff. We met up with Ranger, Jo Petersen from Queensland Parks and Wildlife Services and enjoyed an early 1.5 hour ramble before the sun got high. It’s an easy walk with incredible views and a whole lot of military history. If you’d like to read more about this lovely walk I’ve written about it here: Great Walks of The World, Magnetic Island

What I really loved about Magnetic Island was summed up by this birdie-billboard! “I’m on island time!” Yeah, Right! 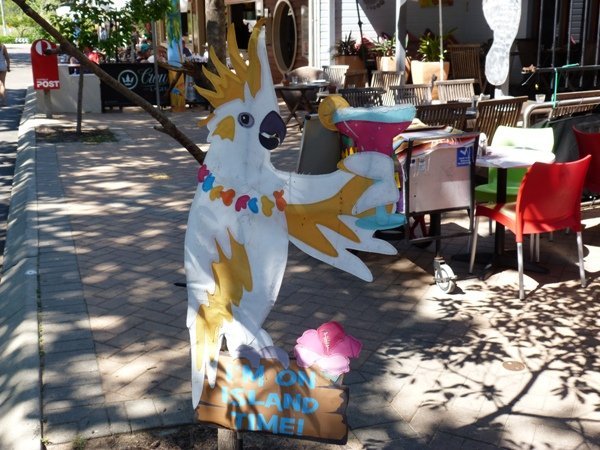 I had a magical few days, and would love to return to discover more. You could visit the Townsville North Queensland website for waaaaayyyy more things to do and places to see than I can write about here.  If you’re going to Queensland on holiday, I’d say definitely go for a gander to Magnetic Island. Honestly, I don’t think you’ll be disappointed.

Now, tell me … where is YOUR favourite holiday destination?

11 Reasons to embrace Change
Next Post: 7 Tips for Solo Travel in your 50’s