You are here: Home / Holidays, Travel & Adventure / Sea Princess Secrets : Behind the Scenes on a Cruise.

During our round the world cruise, we were lucky to be invited on an Ultimate Ship’s Tour which took us backstage to all the places that you normally wouldn’t visit as a passenger. It was an absolutely fascinating behind-the-scenes-look at the inner workings of Sea Princess and is one of the more unusual Sea Princess cruise excursions you can do.

During the Sea Princess tour we ventured beyond the public areas to the ship’s engine control room, medical centre, print shop, laundry facilities, photo lab, bridge and other places reserved solely for the ship’s crew.

The tour is fascinating, and if you get the chance to do something similar on a cruise of your own, then sign up! We were gobsmacked by all the interesting facts and figures about what actually goes into making a World Cruise tick, and to hear a little bit about the crew and what they do –  in their own words. 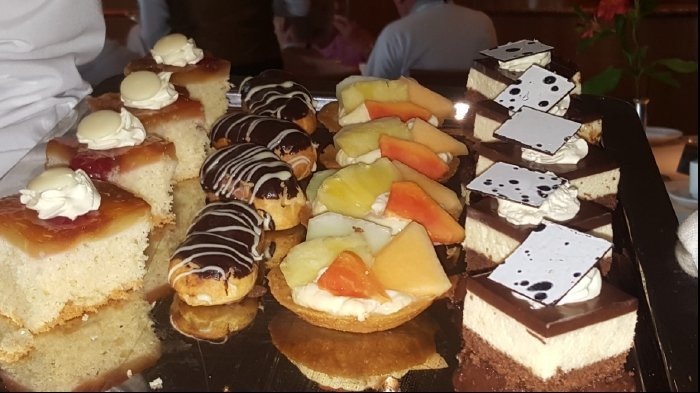 Every day on a world cruise, 2000 guests consume on average about 12 tonnes of food including:

In the medical centre we met David, senior doctor.

“In the medical centre there are 2 doctors and 4 nurses,” he told us. We offer comprehensive care here, including X-Rays and minor surgery, although not major operations, but we can sedate patients and get them to a helicopter or speed cruisers to transport them to the nearest hospital. We have an ICU unit. We can do blood tests on board and we can get the results back in about 20 minutes – we have state of the art equipment, and because our team is always available and knows the ship well we are able to have a fast response rate for emergencies on board,” explained David.

“The only thing we don’t do – Facelifts!” David said, and all of us women who were over 50 laughed!

We met George, the Senior Production Manager who was in charge of all the technical aspects of entertainment in all the lounges.

“I run the lights in the Princess Theatre and I have a team of 8 other guys to help me with the technical side of all the entertainment. I’ve been with Princess for 10.5 years and in the industry for 22 years. I started all this just as a hobby in the Philippines.”

George was really friendly and we’ll never forget the night we sat with him in the Production Box watching The British Invasion production show.

Backstage we met Joseph, the Vocalist and Company Performance Manager, who’s with the Belinda King company.

“We rehearse in England for 9 weeks prior to coming on board and it takes 9 weeks to put 10 shows together,” he told us. “This will be the first time the whole cast of singers and dancers will have worked together, and we’ll stay on a cruise for 6 – 9 months. Before a show goes live on board it takes 3 – 4 days solid to put it together – from getting the lights right, to rehearse with the band, get the props right and then finally stage the show.”

Sarah (left in the pic above) one of the lovely dancers told us a little about their lives backstage.

“We rehearse for 12 – 14 hours a day in the preparation stages. I don’t diet – I can eat practically anything – I need the energy,” she laughed when someone asked if she needed to diet to keep so slim.

Later we visited the anchor room and met Antonio, the Navigator, who’s in charge of planning the voyage,  and second in command, Staff Captain, Giacomo.

The Staff Captain explained to us when and how the anchors and mooring lines are used to secure Sea Princess.

On level 1, the lowest deck on the ship, you’ll find The Laundry – which is a very important part of the ship, and we met Dan.

“This is a 24 hour operation and we have 2 x 200lb washing machines,” he told us. The machines looked like giant versions of those you’ll find at a laundromat.

“They have 13 different programmes from cold to high temperature. There are 8 drying machines which take 75lbs of washing each,” he said.

We saw huge automated machines that take seconds to flat iron and fold sheets – over 1000’s of sheets, napkins and table cloths are processed each day. They’re ironed wet and come out dry.

We arrived on Deck 4 and came to the M1 – the crew highway which runs the length of the ship, and along which food, supplies and crew variously march.

“This is the main thoroughfare,” explained Angus, Customer Service Director, “Through which all service personnel passes.”

“The crew become like a family,” Jodi said. “We work together, play together and go ashore together.”

Reggie was on the technical side of the photographic department where we viewed how our photographs are processed. I was interested to find out that no ink is used in the processing, special photographic paper is used instead, which is very quick to print and apparently it takes about 3 minutes to produce a photo and the machine can produce 3,000 photos per hour.”

Patrick was the printer and in charge of the print shop where the Princess Patter (the daily newsletter provided to all staterooms), port and tour guides, menus and all other kinds of printing are carried out for Sea Princess.

“The machine does 5,000 impressions per hour,” Patrick told us, and we recycle as much paper as possible.

“The guillotine can cut 500 pieces of paper at once. When not in use we offer pedicures and manicures,” quipped Angus!

We met Daniel, First Engineer on board in the noisy Engine Control Room, below.

Later, in the galley, we met Carlo, the executive chef. Carlo’s been with Princess Cruises for 22 years. “I started out with the original Love Boat,” he told us. Below we’re with Carlo and Maitre ‘D Ignazio at the chef’s table.

Markus works in the stores  on deck 4. He’s in charge of all the food  and beverages coming onto the ship as well as all the other supplies necessary to maintain operations. “We have 300 tons coming on board in New York,” he told us.

“The Butchery is located down here on deck 4 and so too the fruit and vegetable preparation area. Ice blocks are made from distilled water and these huge block have to be brought on board and stored for ice carving.”

On the bridge we met some of the officers and of course the Captain.

Brogan the 3rd Officer (back of photo) showed us around the bridge and explained so many things, telling us also that there are no paper navigational charts these days because everything is done electronically. “It’s state of the art,” he said.

An invitation to the bridge wouldn’t be complete without meeting the Captain and we were privileged to meet and chat to Gennaro Arma, Captain of Sea Princess, who is friendly and approachable and told us all sorts of interesting facts.

We found out that the Bridge is manned 24 hours a day, 7 days a week by a team of highly trained officers and crew.

“The Bridge uses the latest technology in marine electronics,” Captain Gennaro told us.”But ultimately I have the last say in decisions that need to be made. However, the only time that this ship is not under my control will be when the pilots board the ship in the Panama Canal.”

“Look there are dolphins on the port side, and a whale,” one of the watch officers on the bridge pointed out as we sipped a glass of champagne looking out over the ocean, and we had a fantastic view of these sightings from the huge window which spans the bridge.

What an amazing way to end the Ultimate Ship’s tour!

For more cruise stories – find them all Here.

This website uses cookies to improve your experience while you navigate through the website. Out of these, the cookies that are categorized as necessary are stored on your browser as they are essential for the working of basic functionalities of the website. We also use third-party cookies that help us analyze and understand how you use this website. These cookies will be stored in your browser only with your consent. You also have the option to opt-out of these cookies. But opting out of some of these cookies may affect your browsing experience.
Necessary Always Enabled

Any cookies that may not be particularly necessary for the website to function and is used specifically to collect user personal data via analytics, ads, other embedded contents are termed as non-necessary cookies. It is mandatory to procure user consent prior to running these cookies on your website.