Downsizing. To downsize or not, that is the question.

You are here: Home / Categories / Downsizing. To downsize or not, that is the question.

For most of my adult life I’ve been searching for dream homes. Gulp. Now I’m facing the idea of downsizing.

I love houses, and have to admit to being very lucky, having lived in a couple of (what I consider) dream houses which for various reasons at various times we had to leave when we moved to different countries.

Now the children have launched and we are alone like Darby and Joan. So like others before us the need for a big, or lavish, or luxe house with a large garden or land is not so important anymore and we are considering small and compact – although to tell you the truth I’m not really in love with the idea just yet.

I still quite fancy the notion of living in an old Cape Dutch house like the one below! Dream on.

Why do we end up in large homes on big blocks?

At the crux of it I guess we bought larger homes as we got older for different reasons.

Maybe for other people there might be other reasons – owning a big house can very much be part of people’s dreams about being successful. Or impressing friends and family might rock some people’s boats. Maybe you were persuaded by an estate agent that you should climb up  the property ladder for investment purposes?

I think we’re also a little bit conditioned by society.

Have you ever been told NOT to buy a bigger house – if you are a product of the 80’s in any way, then you’ll know that everything bigger from shoulder pads to hair to houses was always considered better.

But was it really?

I can’t remember anyone ever telling me that smaller was better. No, as far as I can remember. Minimalism was something the Japanese did.

The fact is nobody told us that us this isn’t necessarily right, certainly not the banks or advertising companies. I think in the last few years there’s been a much more altruistic wave of minimalism, of slow-your-home philosophies, and lower your carbon footprint movements sweeping the psyche of our society, and downsizing has become a modern concept.

“The prevailing advice for retirees and their first cousins — pre-retirees — is to downsize their homes. The logic goes like this: With your kids launched, you no longer need so much space. Plus living in a smaller home will reduce your utility and maintenance bills as well as your taxes. Less expense and less time cutting the grass or fixing things equals more time and pocket change left to enjoy your retirement, or so the conventional wisdom goes.”

So paying for space we no longer need is a bit daft, when what we really need in retirement is cash flow, but living in the big family home means all our money is tied up in the house.

Which means there’s a financial case for downsizing because having a lot of money tied up in our home means it isn’t liquid. We can’t draw from it, do the shopping or pay the bills with it.

12 Reasons why you might be happier downsizing to a smaller house:

So it makes sense that we should all just rush out and downsize, right? Actually, maybe not.

Maybe downsizing to a smaller and less expensive house isn’t the right course for many people?

Reasons Not to Downsize

There’ll be less room for family gatherings and the grandies. And don’t we need a little separation space from each other in retirement when he and me will be spending much more time together?

Smart About Money,  suggests that maybe your new home may not be sufficiently less expensive and if downsizing doesn’t reduce your household expenses by at least 25% then it probably isn’t worth all the upheavel.

Expenses could rank up.

The costs of downsizing.

There’s another thing to consider as well: The costs involved with downsizing. Because of course there are substantial expenses involved in selling your house and buying a new one.

You have to consider how long it will take to recover that money in the long run. Will the new smaller house be saving you enough for all the upheaval to be worth it, especially if you’re already living mortgage free? 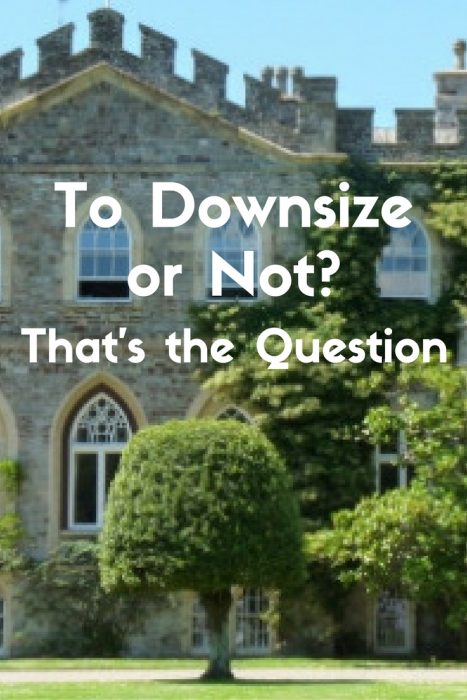 In fact wouldn’t it be better to keep the family home and earn a bit of extra cash by renting out a room, or perhaps you could set up part of your house as an AirBnB,  or just offer one room as  bed and breakfast, or renovate the garage as a studio or workshop to let out to someone who needs one? Or perhaps, with the right permissions, even run workshops from said studio or workshop?

Spending more in the process.

The other thing about downsizing is the thought process involved. You could be thinking in a compensatory way; “Well now I’ve downsized I deserve a better sofa, or we can have a new car, or we’ll put in a new kitchen or bathroom and do other renovations because we’ve moved somewhere smaller!

If a smaller home isn’t going to save you money in the long run, and if it’s not something you really want to do, then you’ll need to think about the other side of the coin and ask yourself if it’s worth all the trauma of moving from a bigger house you love to a smaller house that maybe you’re not really going to like.

Resources you might find useful, and thanks to: Homely, Becoming Minimalist and Huffington Post (The Catch 22 of Downsizing)

So Lifestylers – how do you feel about downsizing? Is your home your castle? Does house size matter to you? What’s important?