You are here: Home / Categories / How to protect yourself from Swooping Magpies

I love birds I really do. Read on and you can see me looking very happy with a host of sqauwking screeching rainbow lorikeets landing (and pooing) all over me. 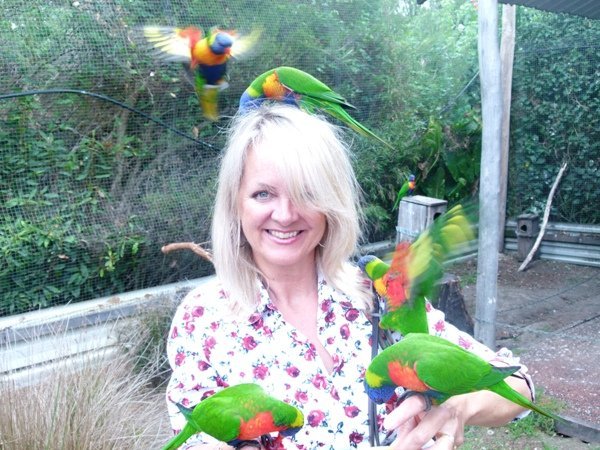 And it’s healthy to get out amongst nature, right?  You know, feed the birds, run with the wind and all that. We need to keep active, engaged and exercising now we’re over 50.

But this time of year my daily power walks are severely hampered by a feathered foe.

I’m talking about magpies. They are bigger, and at certain times of the year, nastier than rainbow lorikeets, and they do not amuse me any more with their sweet chirrupy calls and pretty black and white colouring. 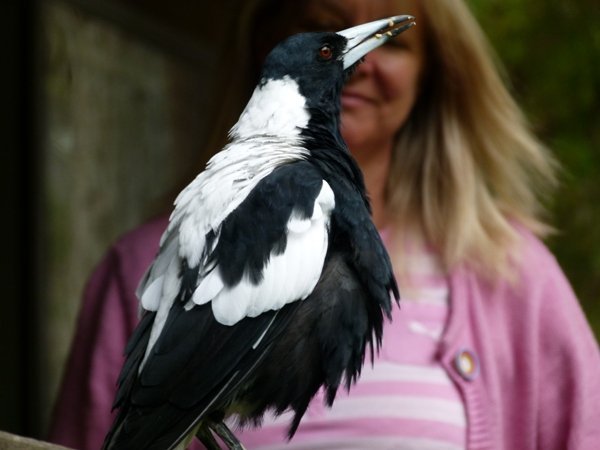 In Western Australia we are into the season of swooping magpies, when whole suburbs of women and children batton down the hatches and become afeard of stepping foot outside.

OK. I am joking (a bit) but I am actually very unsettled by magpies at this time of year.

For a few weeks each spring when Mr Mappie and Mrs Magppie are protecting their nests from the likes of me jogging below the tall Tuart trees they suspect that I’m ready to swoop upwards in some Batman type move to steal their horrible spawn.

Minding my own business, with no thought of adding to my worldly problems with a yearning to hand rear fledgling magpies I am unjustifiably attacked at certain points along my walk. The magpies dive-bomb, cracking their wings above my head like a whip, clacking their beaks in a menacing fashion and coming in cowardly from behind – sometimes banging my head with their beak (if they’re lucky). 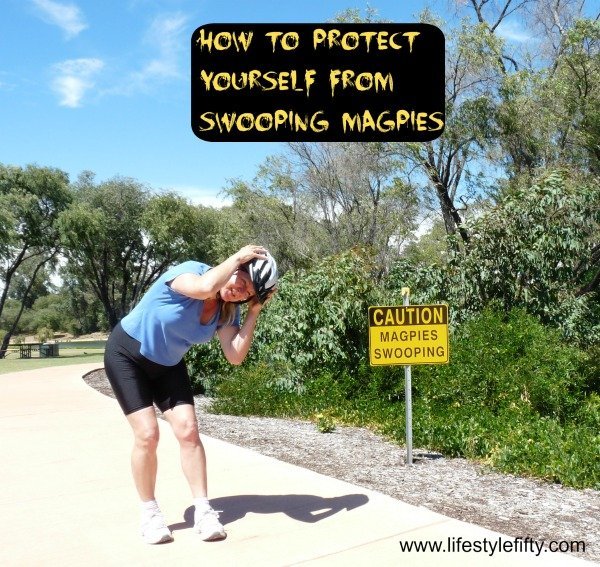 There have been cases of people being seriously injured; getting pecked in the eye, and of other people returning home with bloodied skulls.

We are talking a war zone in the suburbs.

I’ve seen able bodied runners sprinting along our serene lake walk being continually bombed by these birds. No amount of screaming and arm flailing seems to deter them. Indeed no one will rush out of their house to save you. Perhaps you’ll notice a net curtain flicker and hear the thud of a front door being firmly shut, but not a soul will come out brandishing a broomstick to help ward off these seemingly war-mongering birds.

The Parks and Wildlife website has this to say: “Magpies nest between August and October, usually in a tall tree. The female incubates 1-6 eggs for about three weeks and feeds the young in the nest for about another four weeks. A new clutch may be laid if the first brood fails. During this time, the magpie’s urge to protect its eggs and young from attack is very strong.They fly low and fast over the person and often clack their bill as they pass overhead. This can be alarming, but if you confidently continue on your way the bird will often retreat to a tree and watch until you leave its territory. Like dogs, magpies seem to sense fear and may capitalise on it by pressing an attack. A threatening gesture with a hat, stick or umbrella will usually make the bird retreat. It is rare for a magpie to actually strike an intruder on the head with its bill.”

In our suburb at certain spots, it can be like a scene from Alfred Hitchcock’s movie, ‘The Birds’.

How to survive swooping magpie season

Thanks to WikiHow and the Queensland Government Department of Environment and Heritage Protection for some of these preventative tips and information.

Don’t forget that it’s illegal to take any kind of aggressive action to protect yourself – no sling shots, no catapaults as these dastardly dereks are protected under the Wildlife Conservation Act.

Whatever – I just want to keep up my daily walks without being damaged.

Best I start looking for some fashionable magpie armour. Anyone?

Okay let’s hear it then … Have you been swooped by a magpie? Do you have any good tips on evading them?

16 Ways to Glam up and Dress like a Rock Chick
Next Post: 5 Quick Makeup Tips for Makeup in 5 Minutes