You are here: Home / Inspiration / Robyn Davidson The Camel Lady 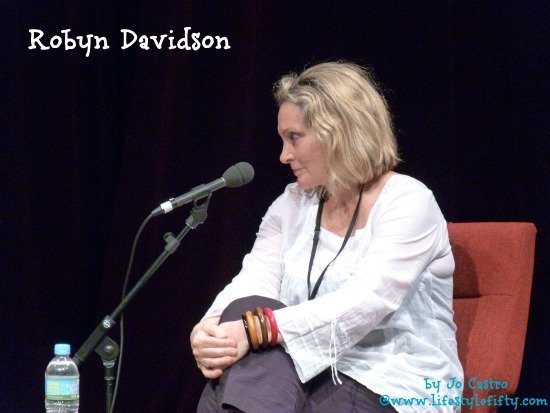 Last night we went to watch the (very good) movie ‘Tracks’, which is the film about Robyn Davidson’s epic 2,700 kilometre trek from Alice Springs across the Australian outback to the Indian Ocean in 1977.

Have you seen it yet? You should definitely go if you enjoy stories about intrepid women. 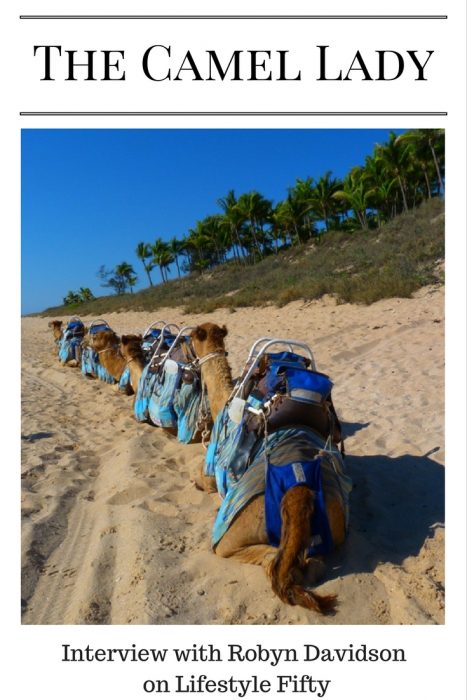 I wasn’t sure a film about a young woman, a dog called Diggity, and four cranky camels walking across vast tracts of the most inhospitable land in Australia would really capture my attention for 2 hours, especially as I had read (and loved) the book shortly after it came out in the early ’80’s, when I was a young backpacker living and working in Alice Springs.

Yes, I knew all about Robyn Davidson, a young woman who had earned the nickname of “The Camel Lady”. Her name was firmly embedded in Alice Springs. So too were Diggity, and her lovable camels, Bub, Dookie, Goliath, and Zeleika.

Isolation and the cliches of our time

In fact so impressed was I with the book that I can remember quoting vast tracts of it in long-hand airmail letters to my then absent boyfriend, because it seemed to me that Robyn connected with my achey-breaky heart at the time. Having recently uprooted myself from a destructive emotional scene at home in England I just ‘got’ her need for isolation, and the need to feel apart from the capitalist empire, and the delicious need to look deep inside at who I really was and live outside the cliches of the time.

Robyn was, and is a symbol of strength, beauty and feminist ideals. She chose to live sparingly and chose adventure over convention at a time when it was in vogue to amass wealth and possessions and when women’s roles were predominantly wife and mother.

So she was, and still is a kind of heroine to me … and I was lucky to meet and chat with her at the recent Perth Writer’s Festival held at the University of Western Australia on the very lovely banks of the Swan River, below. 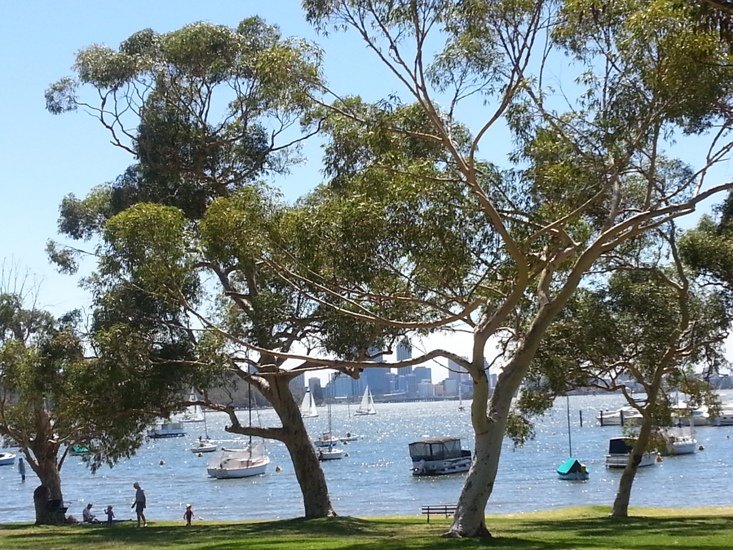 Did I quake? Oh yes, despite my advanced years, I did … a little! I thought she might dismiss me as a whittering fool. 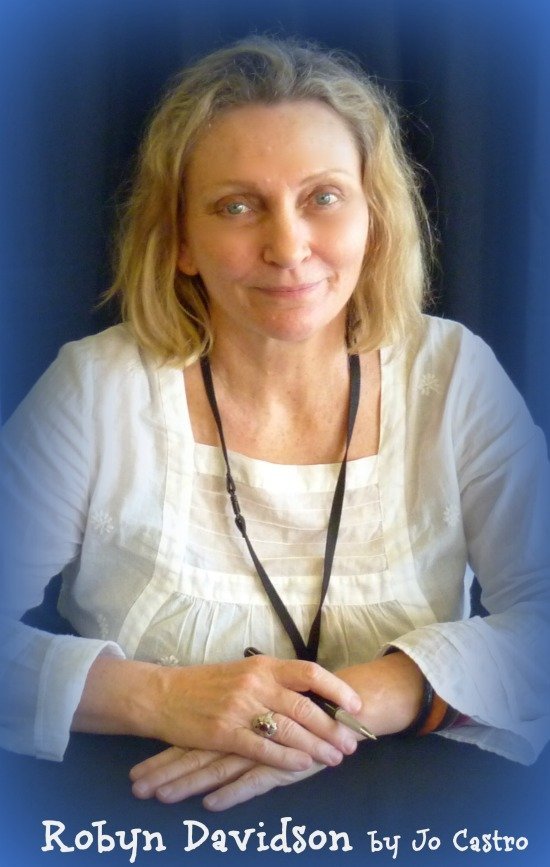 But she didn’t. She had a dreadful cold, poor thing, and though feeling awful she was friendly and warm, with a quiet searching manner.

After Robyn’s interview session in the Octagon Theatre, there was a queu of people dying to speak to her and have their books signed. 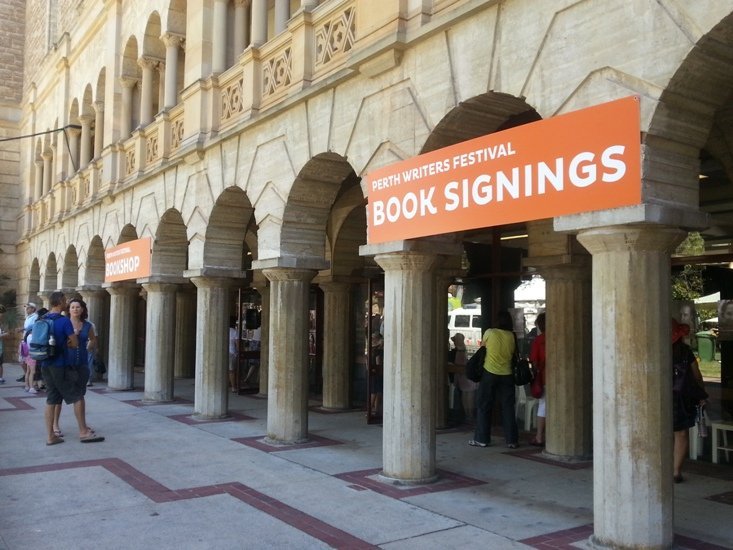 So I quickly explained how much her words had meant to me when I first arrived in Australia, just after I’d backpacked from Sydney to Alice Springs where I found work with a chap who ran tours to Ayers Rock – I might also have moonlighted in a Pizza restaurant, and on occasion sung (badly) in a pub with a Maori guitarist called Doc too.

Anyway, in amidst her hectic schedule of promoting her soon-to-be-released memoir and the film, Robyn who is now 62, very kindly agreed to answer a few questions.

“As you get older your idealism gets tempered somewhat – I’m not quite so cranky. I make sure I have time for myself and have time for solitude and to think deeply about life, and why we are doing it.”

What are you passionate about?

“I am curious about everything and I want to know everything,  especially science.  How could one ever get bored?   I have educated myself to Ph.D. level by listening to every neuro-scientist lecture I can find.  Podcasts are wonderful for that sort of thing.”

So why as a young girl did you do the trek across the desert?

“At the crux of it all was that I wanted to see what I was capable of and it’s extraordinary that you are so much more capable than you imagine. “

You have traveled with nomads in India and made a life in India. Why do you love India?

“I don’t love living in India, I find it incredibly difficult and demanding.  But being there gives me a healthy perspective on the ease and privilege of my life.  Outrageous privilege, outrageous ease.  We should all wake in the morning with a feeling of gratitude for our luck.  Even the bad luck, sometimes.”

Robyn at the Writers’ Fest

During the session at the Writer’s Festival, Robyn was interviewed by Victoria Laurie about her memoir which she said centres around her mother. She was only 11 when her mother committed suicide, “So it’s my story, but my mother in me,” she said. “I’m plagued with the question of ‘why did I do the trek’, and the memoir is to reclaim the notion of the complexity of things that makes anyone do anything.”

The book was written in a cold London flat

Robyn wrote Tracks two years after completing the trek and admits to having no notes written down when she began. “But I remembered everything and I think this was because I was so present at the time (of the trek). I wrote the book in a cold, dingy flat in London reliving desert sunsets by memory. Memory is so slippery and in fact an imaginative act -when you revisit a memory your mind has done something to that memory.”

Raised in the country (Queensland) Robyn says she had access to the world around her but in a different way. “I’m always aware of east south, north and west, and I get fazed in a city. I was raised as a girl, but I learnt about the outdoors from just hanging around my dad, although it was assumed I would be an indoors ‘feminise’d’ creature. But then my Mother was undone by expectations of what it was to be a woman in those days.”

Clearing out her mind

The 9 month trek allowed Robyn to do some clearing out of her mind. “That sort of thing changes you, it’s like chucking out the garbage. I think I was fundamentally changed – the wiring in my mind was changed.”

Having lived close to the earth and spent time with Aboriginal elders Robyn is acutely aware of the destruction of desert and nomadic cultures. “We are beginning to understand how valuable Aboriginal knowledge of our country is and it’s ironic that it comes at a time when there’s so little left. The desert is so changed, radically. The introduction of non native fauna and flora … the destruction of desert.”

So what intrigues her about nomadism?

“I’m curious about nomadism and the fact  that you can’t accumulate goods. It makes for a different reality, and how you are in the world. Nomadic cultures hold onto human values, they look after each other, they don’t accumulate wealth necessarily, they are tolerant of other people, and they are good diplomats. I’m not saying we can return to that kind of life but there’s much to be learnt from the value systems – but that way of life is being obliterated.”

“During the trek, it was the shedding of goods as I went along … which was a metaphor for the shedding of other things, and when you’re alone and contemplating, you do just get rid of a lot of rubbish. It’s part of growing up or growing, and we all have a duty to get rid of our narcissism. The trip forged an individual out of me – it forged together the bits and pieces of me.”

“It’s becoming more and more difficult to think about deeper things – it’s as if we are being tormented by these demands so that we become tame and don’t ask deep questions – such as answering 200 emails a day.”

“My dad was an old dad, he was born in 1900. He was an Edwardian type, from aristocracy, a man’s man, very charming, lovable but hopeless, like men were then!! Emotionally, masculinity had to be acted out with a lot of derring do. My mother was half Jewish, very talented, rather flighty, a little neurotic, he adored her but just didn’t get it. You can see how damaging that point of view was for women, particularly after the Second World War when their lives were circumscribed in a very particular way.”

“My idea of nomadism these days is going between extremely nice hotels!!! I can do the desert and I can do discomfort, but you know Eeeeeugh!”

What would you say to empty nest women who might have lost their Mojo?

“It’s the best time of your life.  You can start a career, go to school, wander, eat what you want, and you have time to read.  Curiosity is the only thing you need.”

If you’d like to buy Tracks, here’s a link to Amazon: Tracks by Robyn Davidson via Amazon

It’s definitely one of my favourite books. It’ll give you an inside view of the Australian outback and instill in you the notion that we are all capable of achieving so much more than we think we can. Here’s a review on Dear Author  I found during my research that might tempt you to buy.

Anyway it’s my Birthday today! So if you do buy the book from the Amazon link above, thank you, because I’m an Amazon affiliate. I promise to spend any earnings on a glass of champagne!

Over to you … did you enjoy this post? Will you buy the book? Have you seen the movie? Please do tell us!

How to write a book in 18 days or How to Make Your Dreams Come True!
Next Post: 10 Makeup Tips and Tricks as you get older