Will Princess Cruises help you Come Back New?

You are here: Home / Holidays, Travel & Adventure / Cruises and Cruising Tips / Will Princess Cruises help you Come Back New? 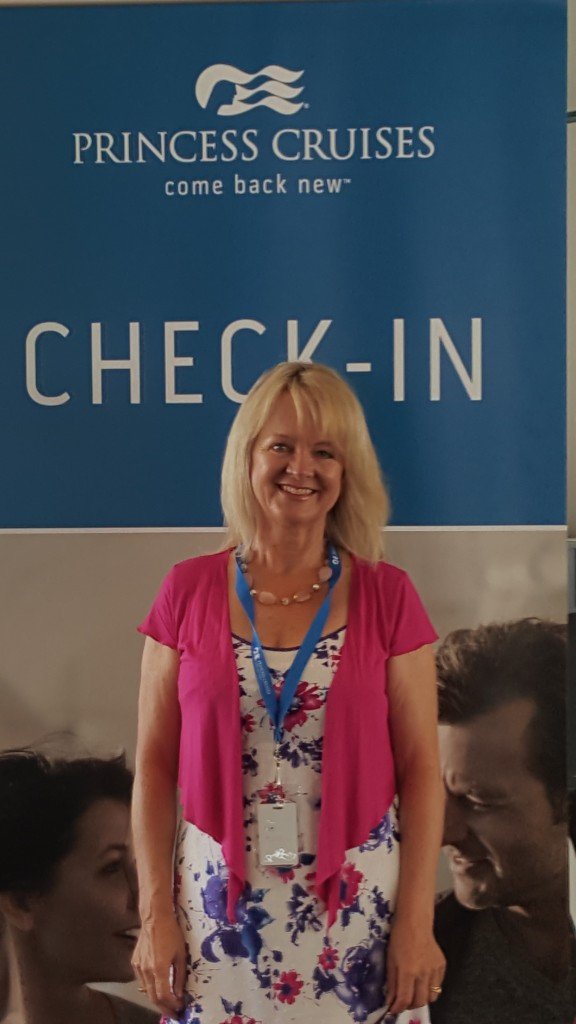 To be completely honest with you I’ve never put a cruise holiday at the top of my bucket list.

I’d always (falsely) assumed it was for those who wanted to  sit around, eat, drink and be relatively immobile, save for a quick march around the ship’s deck, while sailing the seven seas in search of utopia.

But with time, age and wisdom my perceptions are changing … and (ahem) I’d like to eat, drink and search for Utopia. Lol! 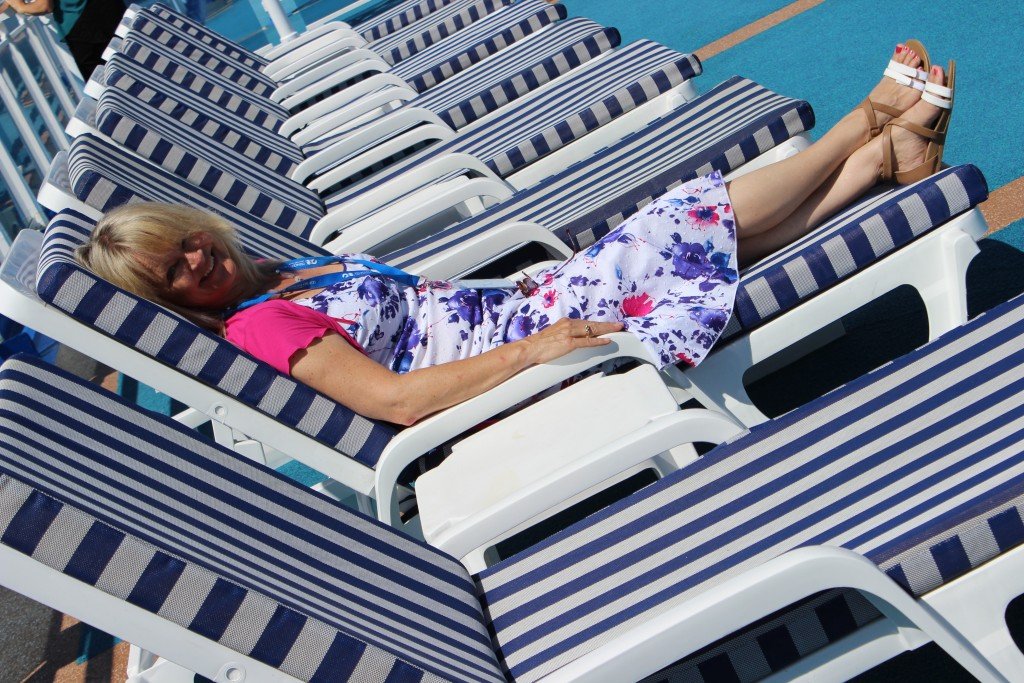 So when I was invited (along with Dave and other bloggers) on what was termed a culinary immersive on board the Golden Princess, the largest cruise ship to dock in Melbourne, I couldn’t quite understand why I was uncharacteristically so excited about the invitation.

I put on my FRANKiE4 sandals and a Per Una sundress from M & S and off Dave and I went to find out what all the fuss is about.

But deep down I think it was a mixture of all that and the idea of experiencing first hand one of the great cruise ships of the world, and I was a little intrigued by the Princess line’s tagline, “Come Back New”. 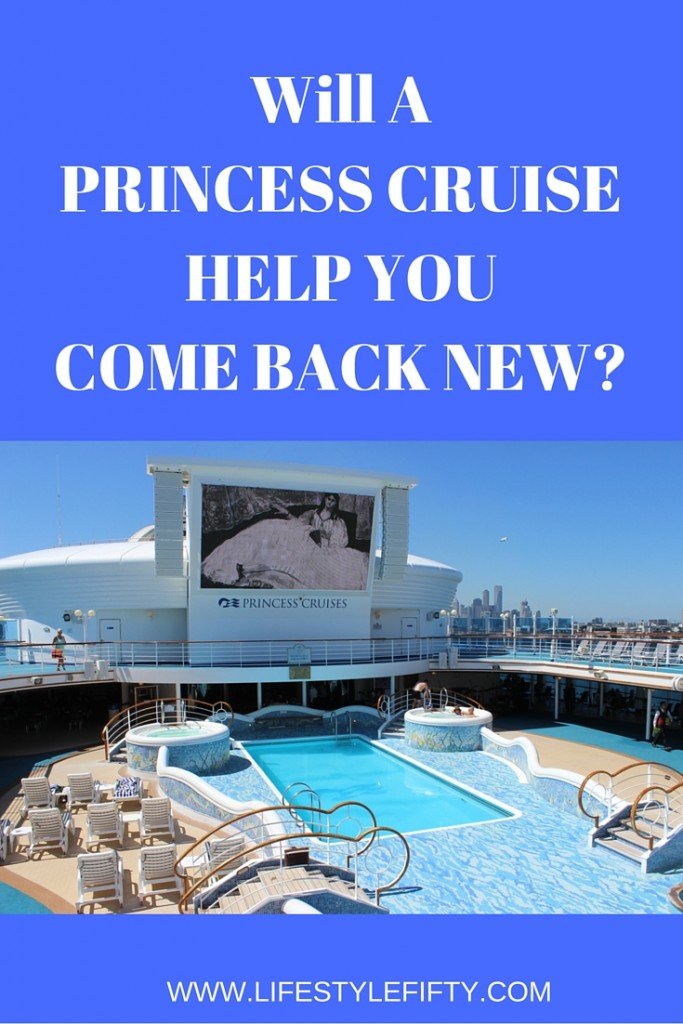 Inside there are Italian style frescoes and paintings along with grand atriums, great big winding staircases and ornamental Tuscan pillars.

It made me feel as if I was stepping into a fantasy. And to boot we all had our names written in bright lights on the ship’s movie screen 🙂 Quite a thrill! 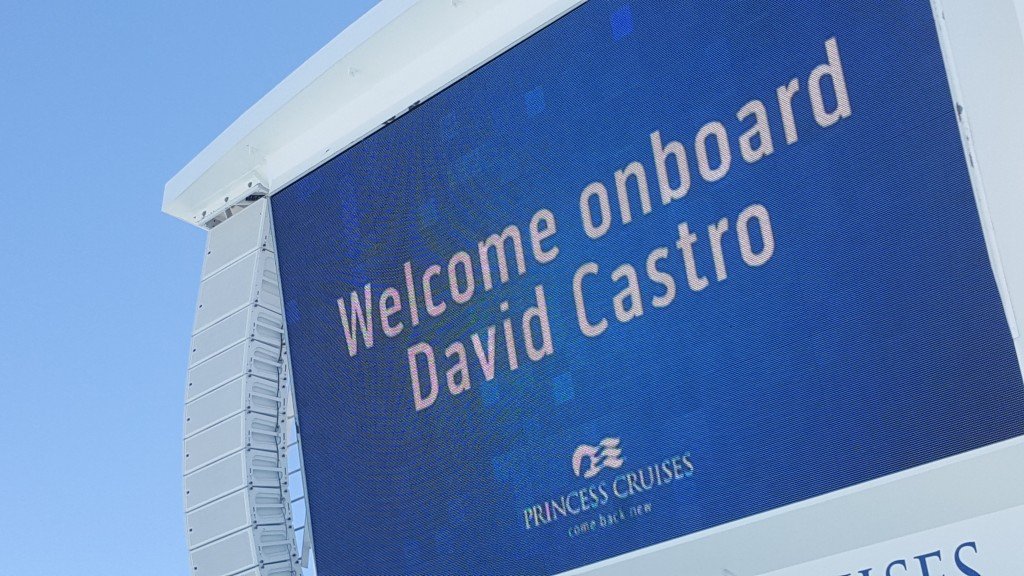 When we were escorted inside a grand stateroom with the old TV series “The Love Boat” airing on the large flatscreen TV, I did feel as if I’d walked into another world: Love and Fantasy with indulgence thrown in. 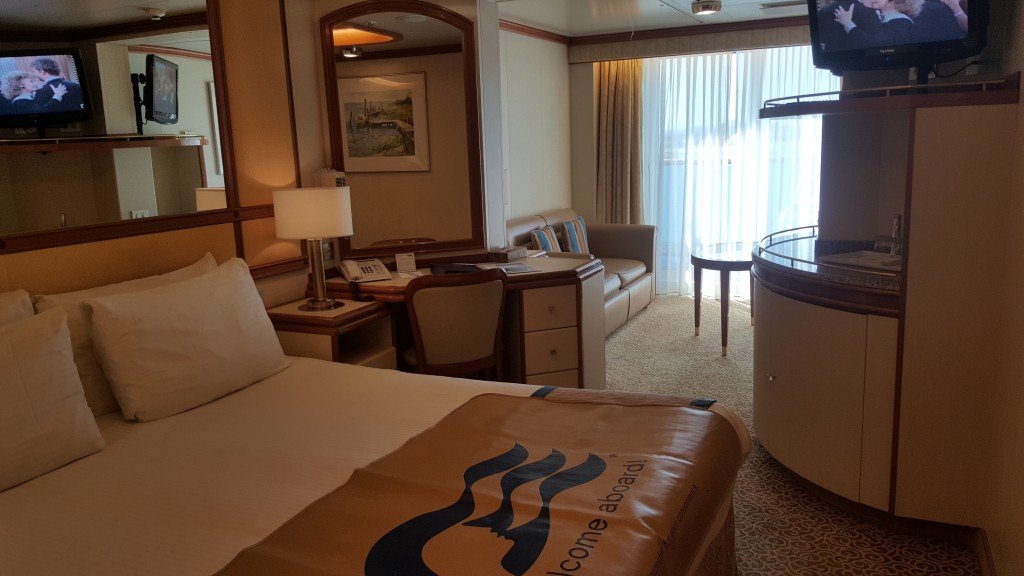 To top if all there was an ever-so-slightly, over-riding sense of being in the move The Titanic, especially when we were embroiled in the first safety drill of the new cruise which was about to head off for Tasmania.

Newbie guests carried life jackets and hurried to muster stations at the sound of the alarm. I must say it was all rather thrilling and I kelt on looking around for Leonardo Di Caprio to appear. No, he’s not anywhere below … that’s photographer Rachel from Sesame Ellis and Janet, again. 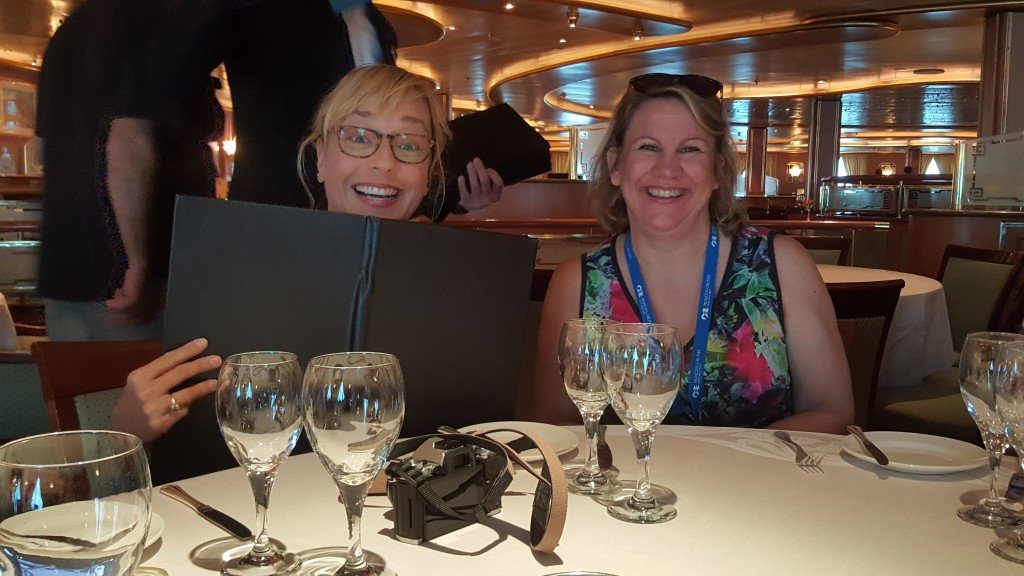 Behind the scenes of a Princess

Being treated to a behind the scenes tour was a little bit like having a sneaky peak into someone’s private life because what struck me most of all was the sense of family amongst the crew. The staff we met were engaged and passionate about their jobs and their lives on board ship. You got the sense of commitment and an overriding desire to please the punters.

Martin May, the Hotel General Manger is in charge of an army of workers.

“I’ve been in the cruise business for 31 years and joined the company when the ships were the size of life boats,” he joked.

Martin runs a tight ship but amongst the frenetic activity of seeing thousands of new guests aboard he had the time to be friendly, disarming and amusing, making us feel like the stars of the show. 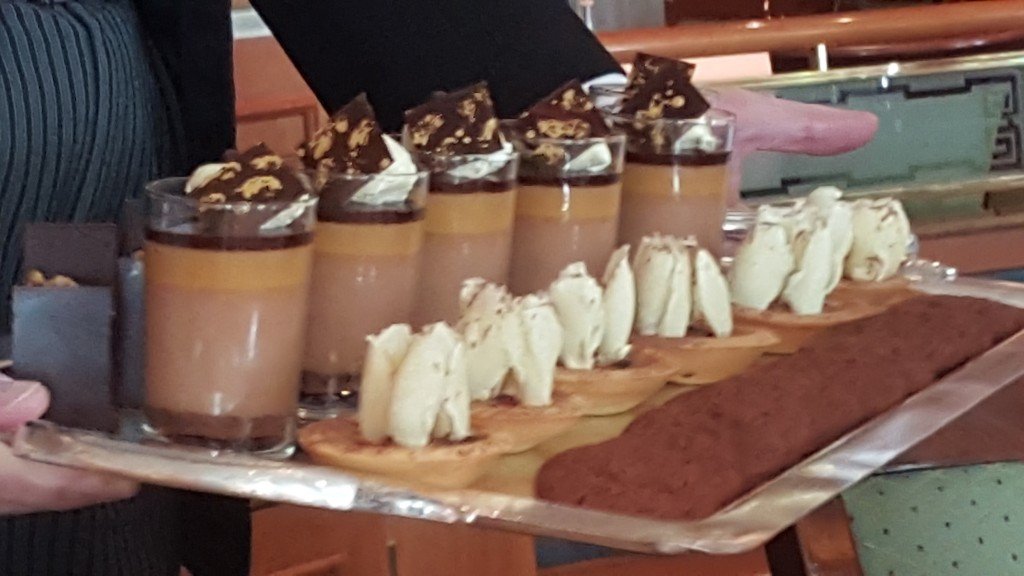 Tasting incredible chocolate creations designed by American Master Chocolatier Norman Love, being wined and dined on chef Curtis Stone’s fresh new culinary creations in a grand dining room, then being treated to a 30 minute pamper treatment at the Lotus Spa were of course cherries on top of the artistically decorated (Norman Love) cake but also very interesting was the guided tour of some of the ship’s amenities and staterooms. 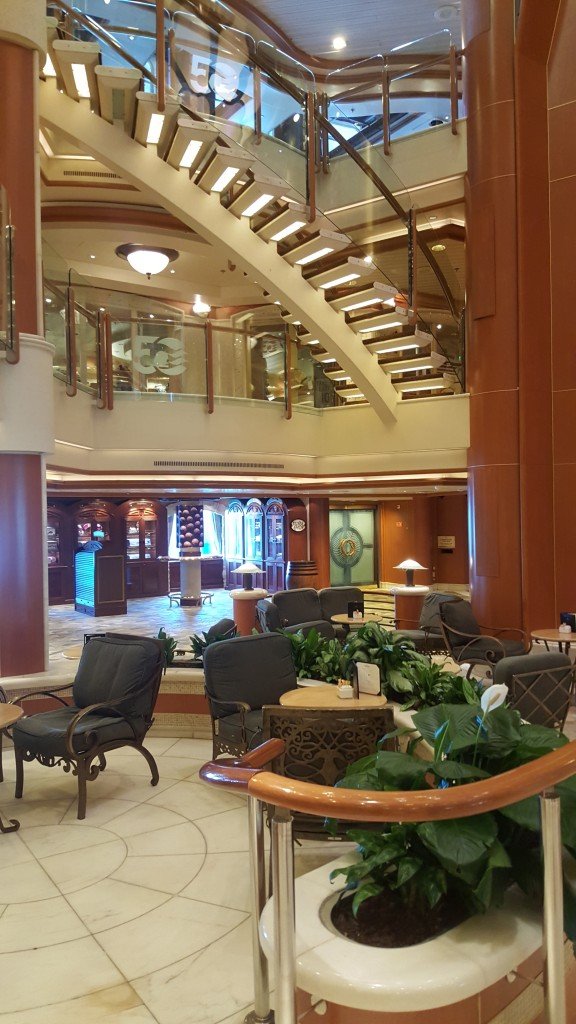 At 54 metres in height, and 290 metre length there’s a lot of ship to explore – To give you an idea of it’s enormity, The Golden Princess’s length is almost equal to the height of Melbourne’s Eureka Tower – and that’s Huge!

Who wouldn’t want to be whisked away in a large luxuriously appointed ocean view Stateroom with a wide balcony as the ship sailed away from beautiful Melbourne into the blue ocean beyond – Me, I would! 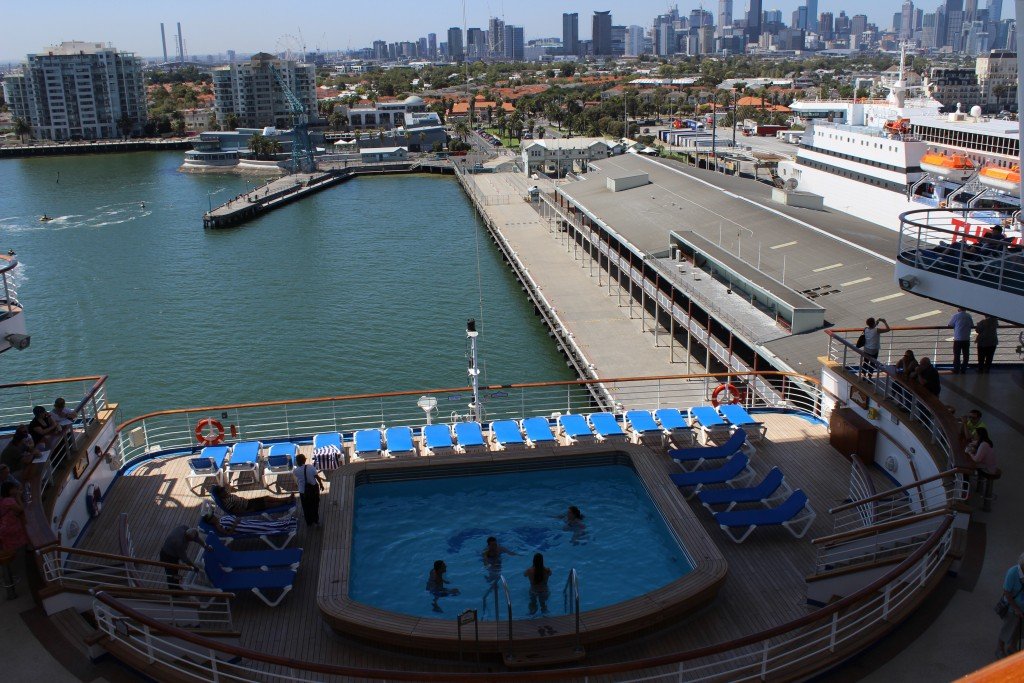 I was impressed by not only the size of this massive floating monster, but also by the fact that with over 2600 passengers and 1100 crew the ship didn’t feel crowded. Surely the guests couldn’t all have been hiding away in their suites and cabins?

But I guess with 17 decks, 4 pools, 9 whirlpool spas, 12 dining options, two show lounges plus other bars and nightclubs, a sports deck, spa and fitness centre, golf putting lawn, library, video arcade casino and even a wedding chapel … Phew … among other attractions … there really is enough room for everyone to do their own thing somewhere or other.

We were treated to one of Curtis Stone’s culinary offerings as part of Princess Cruises “Crafted by Curtis” partnership which features a menu of some of his signature dishes offered in the main dining rooms of Princess Ships. 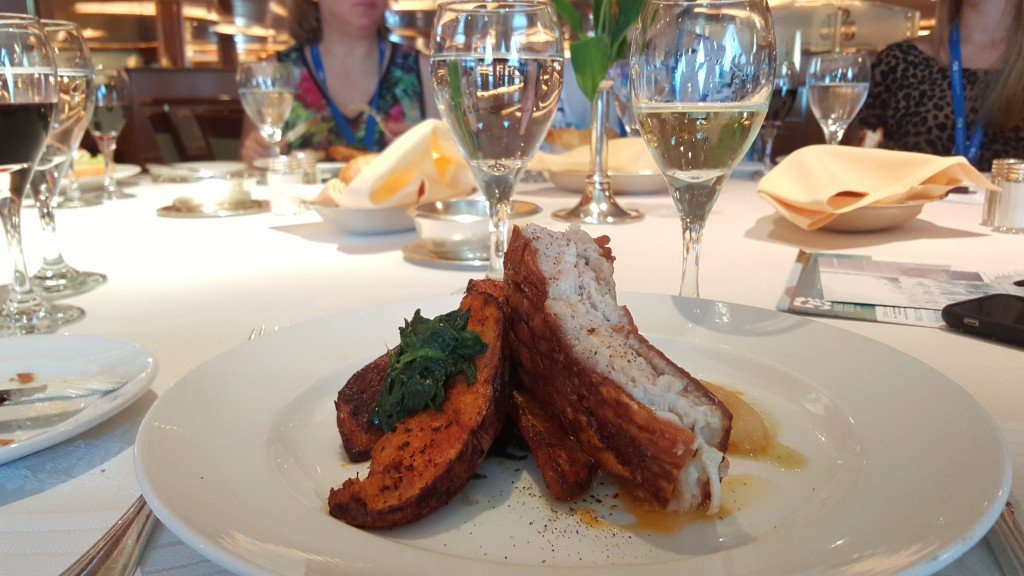 I tried the Roasted Pork Belly with homemade applesauce, crispy roasted potatoes and sautéed spinach. Delish – oh and the crunchy crackling was superb.

Dave munched happily through the Beef Osso Bucco, cannelloni puree, and aromatic jus – slowly braised in white wine and chicken stock – he declared it a rich Italian dish much to his liking!

‘Come Back New’ is the Princess brand promise but having spent a day on board I’m not sure that I haven’t come back everso slightly expanded!

The lovely Mel from Princess Cruises told us all about the Come Back New Promise which is a $450 million multi-year product innovation and renovation campaign. She explained that there are several initiatives designed to deliver this promise which include:-

The Princess Luxury bed (which I SO want to try out) featuring a new specially designed bed to deliver the ultimate night of sleep at sea. Designed in collaboration with Dr Michael Breus, The Sleep Doctor, and Candice Olson – by 2018 there will be more than 44,000 new beds installed across the fleet.

Soon to be rolled out will be Curtis’s first restaurant at sea, called SHARE, which will offer a specialty menu of dishes designed for sharing.

New also will be activities and shore excursions encompassing the new Discovery at Sea partnership with Discovery Communications and [email protected] Messenger a new onboard instant messaging service accessed via a mobile app. 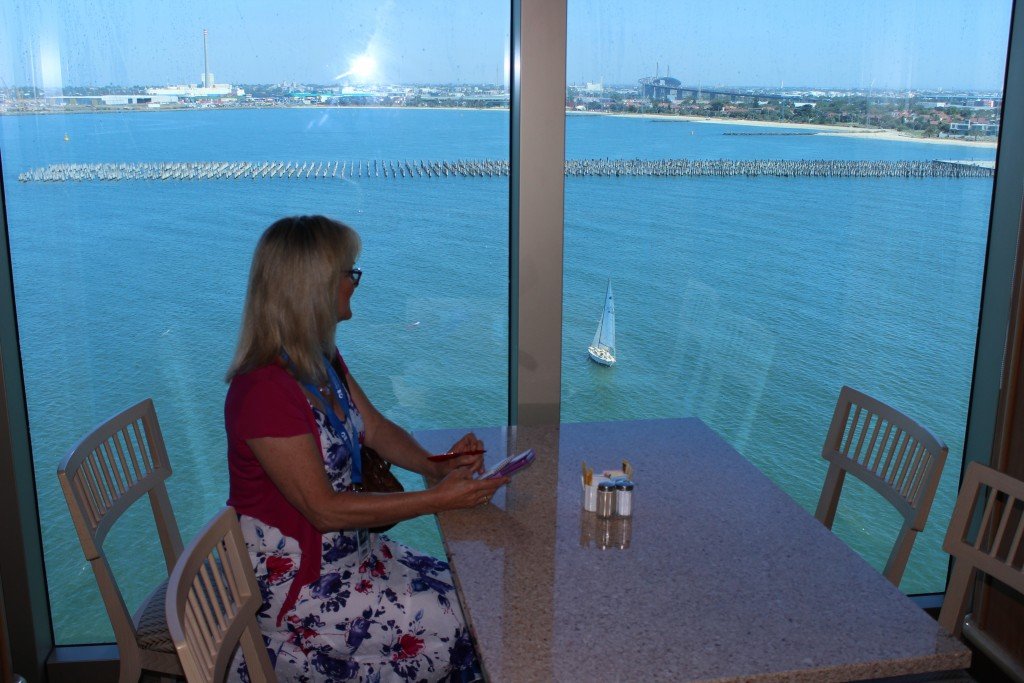 Crazy Facts: What you may not know

The golden Princess was built in Italy in 2001, and currently claims the accolade of being the largest cruise ship ever to be based in Melbourne.

Hosting up to 2600 guests it is double the size of Melbourne’s largest hotel, the Crown Metropol.

At 290 metres long it’s one and a half times as long as the MCG and more than eight Melbourne trams in length.

Cruise prices start from around $1499 per person twin share for a 10-night voyage to the south Pacific, and go up to around $20,999 for the 104 night global circumnavigation to the Land of the Midnight Sun, visiting four ports in the Nordic region and Arctic Circle.

Bad luck for the washers-up, they’ll be rinsing 50,000 dishes and 20,000 glasses each day. Now doesn’t that make home-life seem manageable? 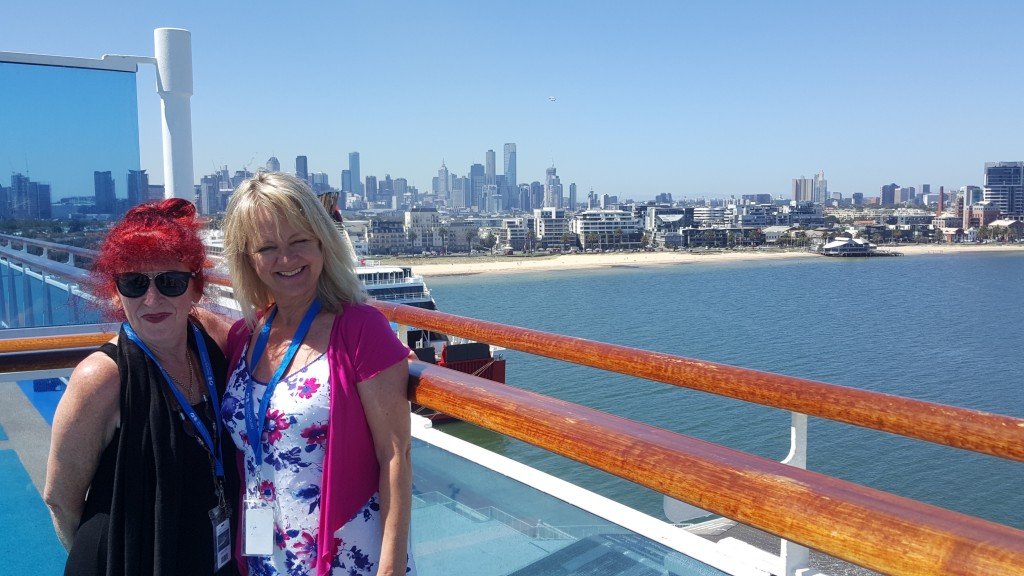 With Paula above, from Contented Traveller who with Gordon her partner are travel writers, destination and experience marketers.

Are your feet getting a little itchy? Mine are!

Yep, you can sign me up please for some time onboard, sailing the seven seas without the stress of airports and security checks, without the need to check in and out of hotels, where I can dine at restaurants with a moving view, and when I’m done trot out and about to discover new and exciting destinations without ever having to touch an accelerator or consult Google Maps 😉

Are you with me? Have you been a-cruising? Where, who with? Or are you a Wannabe like me?

Coming up – A chocolate lover’s dream – watch this space for the next post in my Cruisey Series.

Travel Friendly Shoes Made For Walking and A Giveaway!
Next Post: Scrubba-Dub-Dub and a Giveaway