You are here: Home / Categories / Climbing Mount Everest on her 60th Birthday 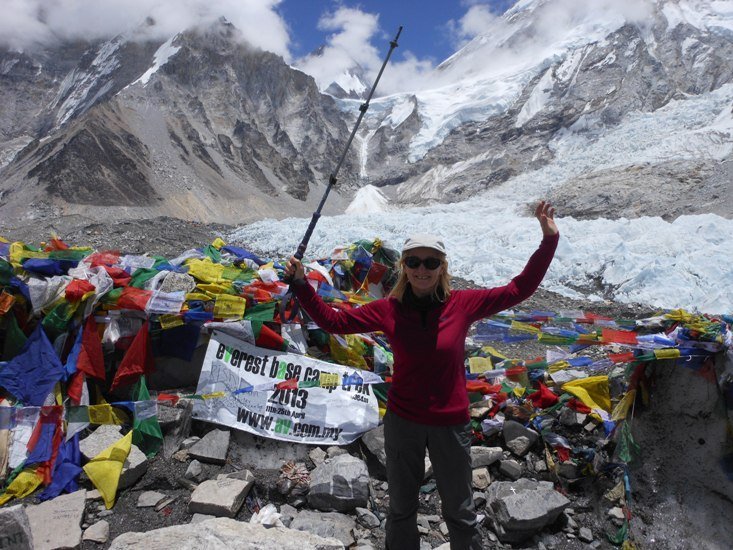 Today’s ‘My Story’  post is by a gorgeous and adventurous woman who hiked to Everest Base Camp in Nepal to celebrate her 60th birthday.

Pam Lynch’s story is one that will inspire you to reach into your own bucket of dreams, maybe get out of your comfort zone. and perhaps go and do, or book something amazing today!  Maybe climbing Mount Everest isn’t your style, but perhaps there’s something else you really want to do? 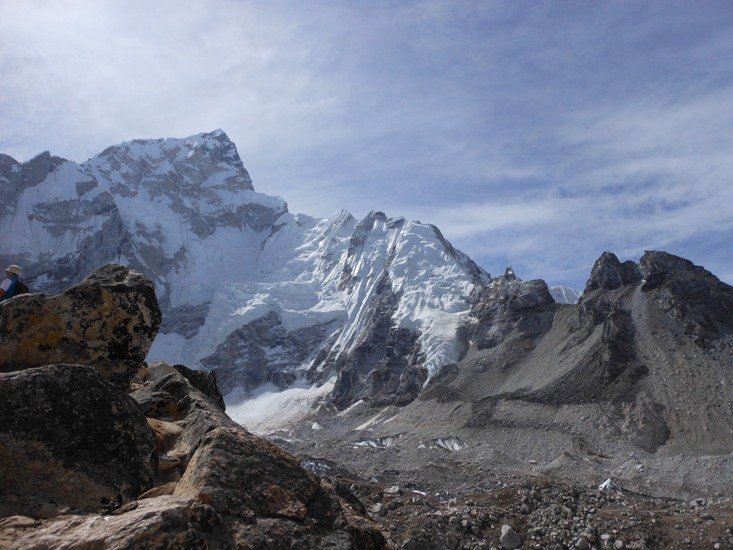 A Wow Moment I couldn’t ignore

As we all know life doesn’t always pan out the way we expect it to. So it also goes with travel – you think you know where you’re heading off to next, you’ve got a list and you’re working through it, but suddenly, WHAM, something hits you out of the blues and you’re off in a totally different direction.

So it was with me recently and consequently my travel plans took an interesting twist.

I was planning where to go next – Paris was high on the list or maybe back to Italy or I could take a trip to Sydney, I’ve never been there, but then, out of the blue one of those ‘wow moments’ happened. The ones that you can’t ignore.

Trolling through travel sites I came across a trek to Everest Base Camp to celebrate the 60th anniversary of the ascent of that great mountain by Edmund Hillary and Tenzing Norgay. As soon as I saw it advertised I knew it was for me, I also knew that the friends that I usually travel with wouldn’t be the least bit interested in leaving creature comforts behind and spending 3 weeks sleeping in tents and going without showers and hairdryers, let alone trekking in the Himalayan mountain range.

Why did I feel so compelled to do this? Well, 1953 was a momentous year, it saw not only the successful attempt on the summit of Everest at the end of May but Queen Elizabeth II was crowned a couple of days later and then in the July I was born. A triple whammy, and I couldn’t think of a better way to celebrate my 60th birthday than to attempt to step lightly in at least some of Hillary’s footsteps.

Once the decision was made I jumped onto blogs of people who had done the trek and realised there would be a lot of training involved, even those forty years younger than me often struggled and succumbed to altitude sickness.  I had 10 months to get myself ready so I set a training regime and knew that I had to stick to it. It wasn’t easy but I enjoyed the exhilaration, I walked a lot, looked desperately for hills in the flat Perth area, and I climbed a lot of steps. An awful lot of steps! In the last couple of months I loaded my daypack and walked 10 kms after work 2-3 times a week, with the SAS motto ‘train hard, fight easy’ constantly pounding in my head. 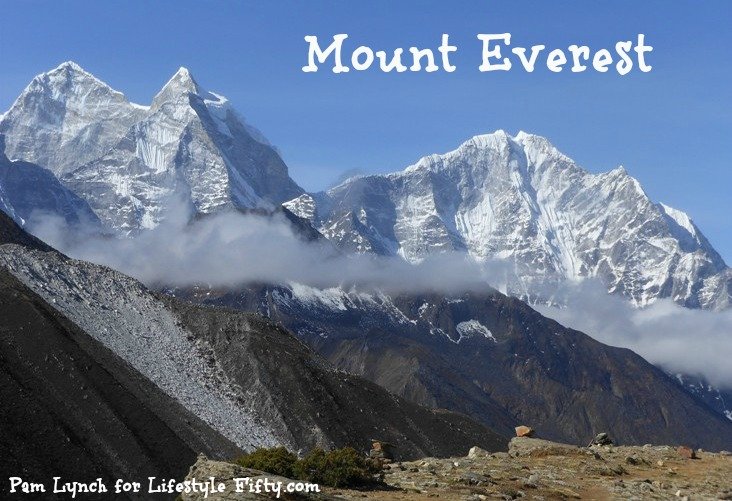 Adventure in the Himalayas

I did all that I could and felt ready, physically that is, I really didn’t know how I was going to cope mentally. Those months passed quickly and before I knew it I found myself at Kathmandu airport awaiting a flight in a helicopter that would take me up to one of the most dangerous airports in the world at Lukla to begin my adventure in the Himalayas.

There were thirteen of us in the group from Australia, New Zealand, England and Scotland with ages ranging from mid thirties to the eldest at 76 years old and we all made it to Base Camp, a major achievement in itself.

I spent three weeks with a group of strangers who became trusted companions. We became close. We struggled, we were down, we laughed and we kept going. 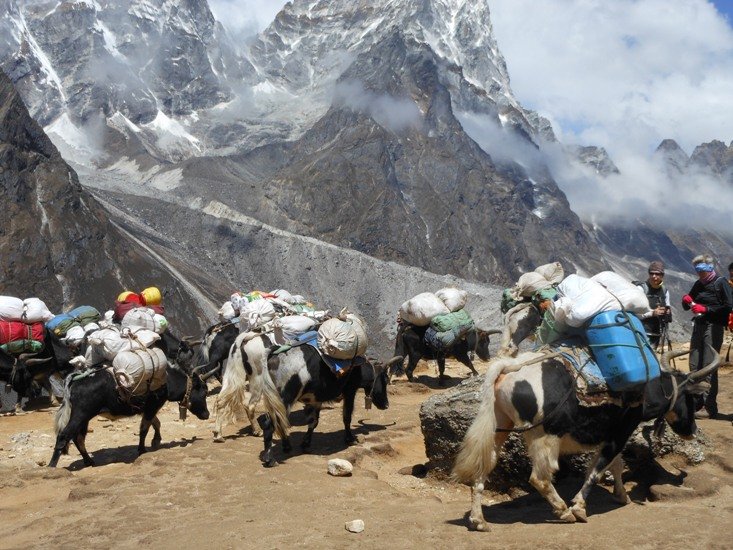 Avoiding yaks, donkeys and porters, all loaded to the nines with all manner of equipment, food and building materials, we traversed suspension bridges slung high above the raging glacial rivers, climbed steep uphill sections of track undaunted by the sheer drop to our right and, refusing to be put off by the effects of altitude and the less than salubrious toilet facilities (basic just doesn’t cover it), we forged our way onwards and upwards.

After a challenging ten days trek my legs gave way beneath me as I finally stood at Base Camp, five and a half thousand metres above sea level, tears in my eyes, unable to comprehend what I’d just done. I sat on a boulder looking out over the Khumbu icefall while cracking sounds warned of glacial unsettling not far away and reality hit me. I’d done it. I’d walked where Edmund Hillary had walked 60 years ago.

The hardest thing I’ve ever done

This trek was undoubtedly the hardest thing I’ve ever done, physically and mentally and required more of me than I’ve ever been called upon to give, but the sense of achievement as I stood looking up at those mountains was worth every step I took, every boulder I scrambled over and every scary suspension bridge that I crossed.

I’ve been privileged to experience a culture and a landscape that most people don’t have the opportunity to do and I’ve proved to myself that I’m capable of succeeding in whatever I set my mind to.

This trek is not for everyone, it’s not something that I would recommend to everybody as a must do, it’s something you must want to do. But if you do want to do it, then I would highly recommend it.

If I can do it then so can you! 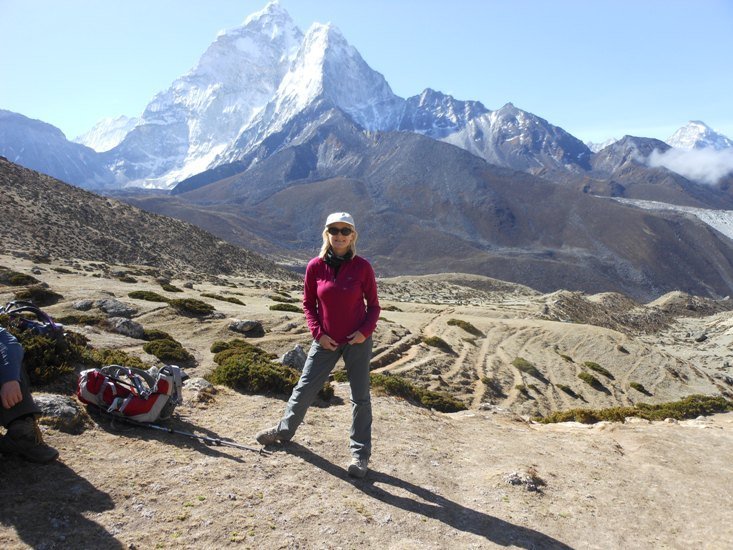 5 Essential tips for a successful trek

Bio:  Pam, a freelance writer and blogger, is based in Perth but is determined to see and experience as much of the world as possible and she’s just as happy sleeping in a tent in the Himalayas as luxuriating in an upmarket tropical resort. As an insatiable traveller she sees no reason why age should slow her down and two years ago decided to share her love of travel with others of a like mind on her blog Travellingbag. http://www.travellingbag.com.au

Lifestylers, are you planning anything awesome in the near future, or what have you already done that you’re really proud of? Why not tell us in the comments?